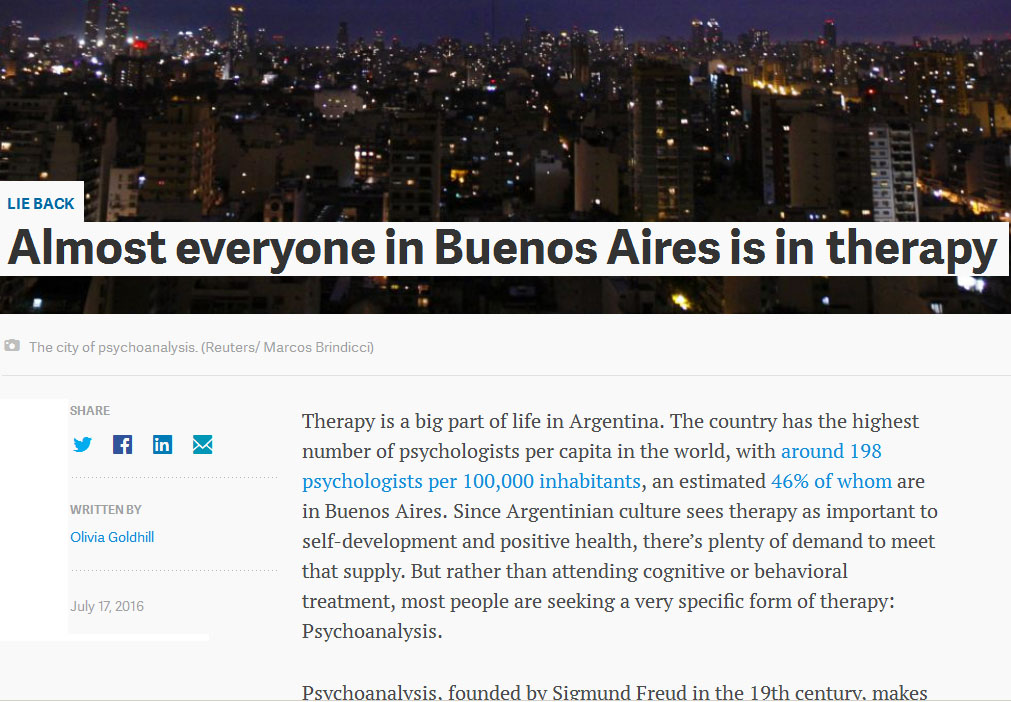 Therapy is a big part of life in Argentina. The country has the highest number of psychologists per capita in the world, with around 198 psychologists per 100,000 inhabitants, an estimated 46% of whom are in Buenos Aires. Since Argentinian culture sees therapy as important to self-development and positive health, there’s plenty of demand to meet that supply. But rather than attending cognitive or behavioral treatment, most people are seeking a very specific form of therapy: Psychoanalysis.

Psychoanalysis, founded by Sigmund Freud in the 19th century, makes use of fantasies, dreams, and free association speech to uncover repressed ideas in the unconscious and help the patient gain new insights into their emotions and experiences.

Mariano Plotkin, history professor at Universidad Nacional de Tres de Febrero and the leading authority on the history of psychoanalysis in Argentina, explains that although psychoanalysis was known in Buenos Aires since the 1910s, it experienced a cultural boom after dictatorial President Juan Perón was overthrown in 1955.

“That opened a moment of fast cultural modernization in Argentina,” says Plotkin. “There was a big reception of anything coming from Europe. Psychoanalysis was seen by many as a emancipatory doctrine.”

Certain well-known psychologists such as Enrique Pichon-Rivière had immigrated to Argentina, so the country had a strong foundation of psychoanalytic knowledge, adds Andrew Lakoff, a sociology professor at the University of Southern California who has conducted research on psychoanalysis in Argentina. Among Buenos Aires’ educated middle-class, there was a lot of prestige associated with self-improvement.

During the 1960s and 1970s, Lakoff says, psychoanalysis became not just a “prestigious way of understanding and forming oneself,” but also linked to a leftist political ideology.

During the cultural suppression of dictatorships during the 1970s, psychoanalysis was seen as subversive. A group called Federación Argentina de Psiquiatras linked psychoanalysis with Marxist theory; this group was targeted by the military and, Lakoff says, psychoanalysts struggled to find jobs or publish their work. “With the return to democracy in 1983, it was again prestigious because it was associated with resistance to totalitarianism,” he adds.

Another key moment for psychoanalysis in Argentina, says Plotkin, was when the intellectual Oscar Masotta introduced the ideas of French psychoanalyst Jacques Lacan to Argentina with a series of lectures and books in the 1970s.

“If you talk about psychoanalysis in Buenos Aires today, you’re really talking about Lacan French psychoanalysis. Argentine intellectual elites were always very receptive to everything coming from France,” he explains. “The infatuation with French culture is a broad phenomenon along Latin America, except that here [in Buenos Aires] there’s a larger population of middle-class who had access to these cultural artifacts.”

Though some psychoanalysts are pricey, there are plenty of inexpensive options available, with the cheapest therapy sessions costing around 150 Argentinean pesos ($10.)