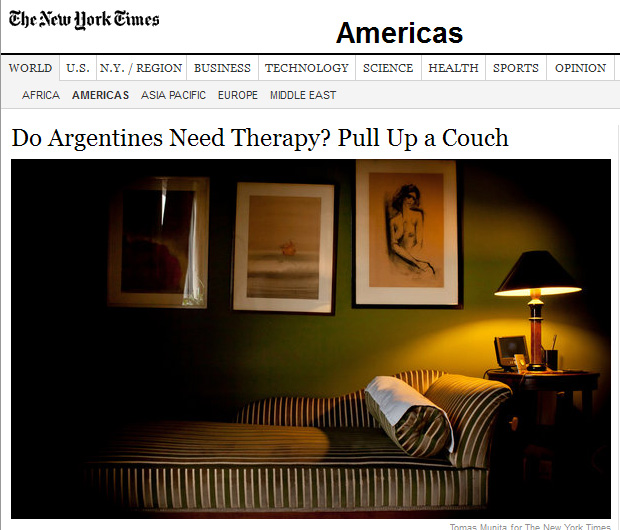 [click here to read the whole article on the New York Times site.]

“There is no taboo here about saying that you see a professional two or three times a week,” said Tiziana Fenochietto, 29, a psychiatrist doing her residency at the Torcuato de Alvear Hospital for Psychiatric Emergencies, a public institution. “On the contrary,” said Ms. Fenochietto, who has been in therapy herself for the past eight years, “it is chic.”

One need not wander far in this city to get a grip on the resilient obsession with neuroses of various stripes. The name Villa Freud is a nod not only to the Austrian founding father of psychoanalysis, but also to the number of psychologists who ply their trade in the buildings along the elegant streets around Plaza Güemes, in northern Buenos Aires.

A short cab ride away, in the theater district along Avenida Corrientes, lines form each night where the local adaptations of two hit plays have opened side by side: “Freud’s Last Session,” currently an imagined debate between Sigmund Freud and C. S. Lewis, and “Toc Toc,” about obsessive-compulsive disorder.

Slip into many bookstores here, and tomes abound written by Argentines about the psychological ills that plague people, and their cures. Malele Penchansky’s “Universal History of Hysteria” and Alejandro Dagfal’s “Between Paris and Buenos Aires: The Invention of the Psychologist” are among the offerings. A new prizewinning Argentine comic book, “Repairer of Dreams,” even blends psychoanalysis into the tale of a dystopian city called Polenia.

Psychoanalysis is not just for Argentina’s moneyed classes, with some psychoanalysts in the state medical system offering patients free sessions. And while some private health plans do not pay for psychoanalysis, insurance programs for some unionized workers cover dozens of therapy sessions a year.