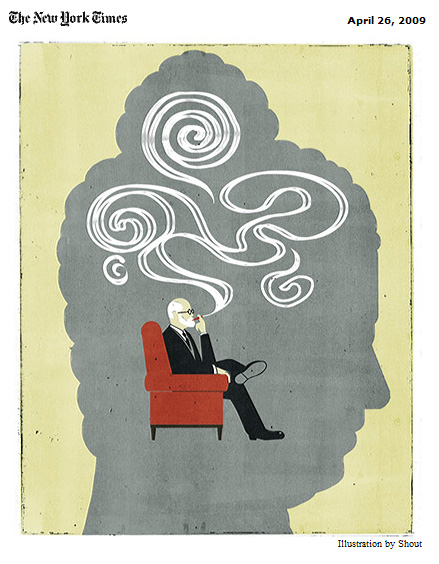 [Click here to read the whole article on the New York  Times site.]

If he hadn’t been so distraught, he might have laughed at the absurdity of it: a Zen master in the waiting room of a psychoanalyst. He was a connoisseur of contradictions, an unsentimental man with a “Zen noir” temperament and an un-self-sparing wit. “Anywhere I hang myself is home,” he liked to say. It amused him that the greatest discovery of his life happened almost by accident — that his decision to renounce a tenured professorship in philosophy and become a Zen Buddhist monk 35 years ago rested not just on the traditional revelations of an enlightenment experience (floods of light, samadhi or oneness, ineffable joy) but also on some farcical hurdles concerning Jewish wedding etiquette and his belated discovery that he had indeed been circumcised as a kid.

But that afternoon in July 2006, driving from his home in Brewster, N.Y., to the shrink’s office in Bedford Hills, he was frantic with anxiety. He found a seat facing the door, consumed with the feeling that no one could see him, that he’d become, in his phrase, “the invisible man.” He feared what the desire to be seen might drive him to do. How could he have spent his life cultivating unity of body and mind, oneness with all beings and the ability to apprehend reality directly, unmediated by thoughts or concepts or what Zen considered the arch delusion of “the self” — only to be haunted by the feeling that he lacked the most basic unity of all?

His self-alienation had divided him in two. Sometimes he was the Zen master Mitsunen (the name meant “Now Mind”), who got up before dawn each morning to sit selflessly for hours in meditation. Mitsunen received dharma transmission, by which teachings are passed from master to disciple, in the Soto school of Zen and was ordained a Zen monk in the Soto and the Rinzai schools. He served as head monk at the International Dai Bosatsu Zendo Kongo-ji in upstate New York in the 1970s; for years he has led Zen retreats in Florida and North Carolina.

Other times he was Louis Nordstrom, a 63-year-old professor, poet and essayist with a round face, a shaved gray head and a shaky grip on whatever guise it was that people employed to navigate train stations and grocery stores. He earned a Ph.D. in philosophy at Columbia (his thesis was on Sartre’s theory of evil), and after giving up the monastic life he chose over tenure, he scraped by on teaching gigs at half a dozen schools, including Yale and N.Y.U. But the anxiety he was mired in in the summer of 2006 seemed deeper than what might be expected from financial or professional insecurity, or the infirmities of growing old, or even the aftermath of a busted marriage — his fourth. For two decades he lectured on the emergence of Western lay Zen, arguing against what he saw as the antiemotional bias of monastic Asian Zen in favor of an approach that integrated psychological experience into meditation practice. But as a pioneer of Zen in America, he had little success practicing what he preached. An antidepressant hadn’t helped much. Often in tears, he wondered if he was having a nervous breakdown. In a poem, he wrote:

Has penetrated the bone,

I have misplaced the meaning

the measure of its loss.

has become my treasure,

in my courtship of vagrant nowhere …

Here he was now, penciled in for 2:30 on the afternoon of July 7, 2006, in a waiting room tastefully littered with back issues of The New Yorker and yoga magazines, hoping for … what? To be seen. To be understood. To be saved in some way.

“Hi,” a man said, emerging from an office with his hand extended. “I’m Jeffrey. Are you Lou?”

Nordstrom nodded. He had gotten the therapist’s name from a friend. For a moment the two men measured each other across clasped hands. Then they went into the office and closed the door.